CellCept is the brand name for the drug also known as mycophenolic acid – an immunosuppressant used to treat a variety of medical conditions; – organ transplant rejection to autoimmune and inflammatory conditions such as systemic lupus erythematosus. This drug is taken orally where it is absorbed and processed by the liver into its active form which inhibits a specific enzyme: inosine monophosphate dehydrogenase. Without this key enzyme, specialized cells of the immune system cannot replicate their DNA. Therefore, this drug strongly suppresses immune responses with only minimal damage to other cells. Due to its properties it is widely used to combat many diseases that are caused by the immune system.

The immune system is a bodily function that normally works to protect our own cells from harmful invaders such as bacteria and viruses. While this is usually a good thing, it can turn against us in cases such as transplant organ rejection. In this situation, a patient received an organ from another person, a kidney for example, and cannot survive without it. However, the immune system correctly recognizes the new kidney as not-self, and begins to mount an attack against the perceived invader. If it were not for mycophenolic acid and drugs like it operations such as heart, kidney, and lung transplants would not work. However, this is not the only situation in which the body’s immune system works against the well-being of the patent – sometimes a person’s immune system attacks its own body! The mainstay of treatment for these diseases include immunosuppressants like Cellcept. Some examples of dermatologic autoimmune diseases treated with mycophenolic acid include psoriasis, pemphigus vulgaris, systemic lupus erythematosus, and Bechet’s disease.

One of the major side effects of CellCept is the consequence of having a suppressed immune system: increased risk of infection. While suppressing the immune system of patients with autoimmune diseases will lessen their symptoms, it will also reduce the body’s ability to defend itself against actual inavders. Therefore, people taking CellCept should be extra careful to take precautions to avoid infections, and should go to their doctor if infections do occur. However, this not its only side effect, as people who take this medication may also experience gastrointestinal upset such as nausea, diarrhea, and vomiting. Furthermore, this drug not only reduces number of specialized immune cells but also red blood cells and other white blood cells which may result in anemia – a state in which a person’s blood has an impaired ability to deliver oxygen to tissues. In some rare cases new malignancies such as lymphoma are thought to be related to mycophenolic acid exposure.

However, this drug is relatively new in its usages, especially with its new applications in treating autoimmune diseases. CellCept and drugs like it have given people new life, but the side effects may be prohibitive for many patients. Immunosuppressive drugs are being actively researched and new formulations are being discovered that enhance the drug’s therapeutic effect while lessening adverse side effects. The future is hopeful. 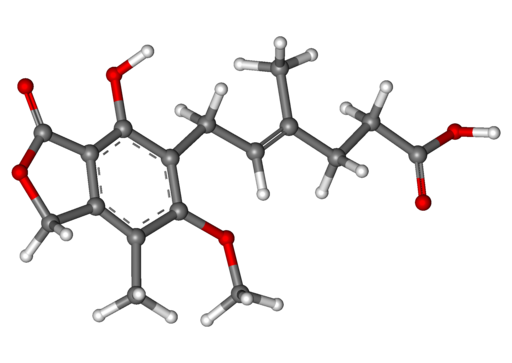 Photo courtesy of Marina Vladivostok (Own work), via Wikimedia Commons

* Results and your patient experience may vary
December 28th, 2017|Medical Dermatology
Previous Next