A nevus, or mole, is a normal and benign proliferation of melanocyte cells that results in the formation of a raised pigmented growth. A nevus can be present at birth (congenital nevus) or be acquired (melanocytic nevus). Congenital nevi are uncommon, so most nevi are acquired in the first few decades of life – new moles in elderly people are very rare and should be evaluated by a dermatologist. A nevus begins as a flat macule of hyperpigmentation, grows into a raised bump (papule), and eventually loses its color as the melanocytes migrate deeper with age. These changes occur over decades and are normal, but if a mole beings to change rapidly consult your dermatologist. Nevi are more common in individuals with fair skin and hair, occur on men and women equally, and can darker or enlarge during pregnancy. 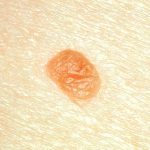 A dysplastic nevus has features similar to a melanoma and can be difficult to distinguish from one. People with one or more dyplastic nevi are at an increased risk for developing melanoma – a highly malignant cancer composed of melanocytes. Melanoma can arise from existing nevi or appear as a new and atypical mole.

A – Asymmetry: the growth is not symmetrical
B – Border: the edge of the growth is uneven or jagged
C – Color: the growth shows varying shades of black, brown, red, white, or blue.
D – Diameter: the growth is greater than six millimeters in diameter.
E – Enlarging: over time the growth evolves or increases in size

Melanocytic nevi respond well to many forms of treatment. A nevus can be removed surgically – either by shaving it off or excising it completely, or it can be ablated by electrocautery, liquid nitrogen, or specialized lasers. Many dermatologists perform a biopsy on nevi before removal to ensure they are not malignant.

* Results and your patient experience may vary
March 10th, 2016|Medical Dermatology
Previous Next