Hyperpigmentation occurs when melanocytes (cells that are found naturally in the skin) overproduce pigments known as melanin, resulting in darker tones than the surrounding skin. This common condition has many potential causes and is almost always benign. Hyperpigmentation tends to occur more frequently and have a greater effect in people with darker skin tones.

Melanocytes are stimulated to produce melanin when exposed to UV radiation in sunlight. Many people take advantage of this process to tan – spending hours exposed to the sun to achieve temporary darker skin tones. While some find tan skin appealing, this practice leads to long term damage to the skin which, in addition to an increased frequency of skin cancers including the highly malignant melanoma, leads to the formation of undesirable patches of hyperpigmentation called solar lentigos (also known as liver spots). These flat tan spots are typically benign and require no treatment. 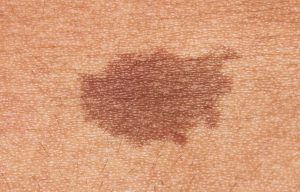 Sun exposure contributes to the formation of melasma, a form of hyperpigmentation that results in large and irregularly-shaped patches of hyperpigmentation. Anyone can get melasma, but it is much more common in pregnant females with a history of sun exposure. Melasma is thought to be caused by a combination of hormonal changes normally experienced during pregnancy and UV radiation, and usually vanishes without intervention in the months following pregnancy.

It’s a Natural Response to Inflammation or Injury

Be Sure to Use Sunscreen

The most important component of any treatment of hyperpigmentation is addressing the initial cause of the response, followed by sunscreen. This will help prevent any blemishes from getting worse and will allow the skin to begin de-pigmenting naturally. There are numerous topical treatments available both over the counter and by prescription which accelerate the lightening process, most of which involve a bleaching agent or retinoids. Furthermore, there exist many laser and light treatments that can reduce the appearance of these tan/brown spots. Consult with your dermatologist to devise a treatment plan that is right for you.

* Results and your patient experience may vary
December 7th, 2015|Medical Dermatology
Previous Next